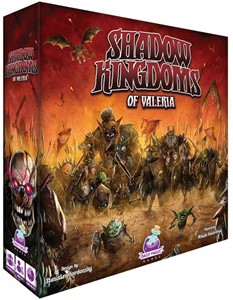 Shadow Kingdoms of Valeria
For years the humans, elves, and dwarves have been slowly encroaching on your territories and slaying your kind in the name of progress. They've built their citadels, keeps, and villages as they push you further into the darkness. 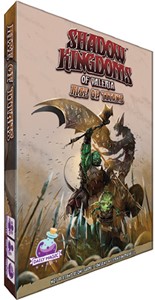 Shadow Kingdoms of Valeria - Rise of Titans
Lord Nore, the Lich King, has sacrificed his essence in order to become the Shrine of the Titans, allowing Wardens to resurrect their strongest warriors. As the Shrine magically snapped into existence, it also unearthed ancient spells that will help you turn the tide of battle or manipulate your status within the war. 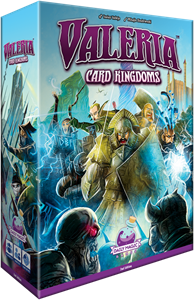 Valeria - Card Kingdoms 2nd Edition
This new edition of the Valeria: Card Kingdoms base game will have a lower MSRP than the original so that more gamers can enter the amazing game universe we launched back in 2015. It will have a new system of tracker boards, tokens, and +10 markers to count resources, and the box's plastic insert will have a special well to store the track boards.

Valeria - Card Kingdoms Crimson Seas Expansion
In Crimson Seas, you will obtain Maps to new far-off lands beyond the borders of Valeria allowing you to import trade Goods from Araby to increase your victory points, purchase Tomes of great power to augment your resource production, rescue captured Nobles from the villainous Amarynth Empire, and plunder the wealth of the Cursed Isle. 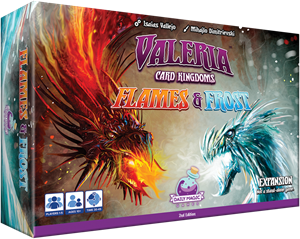 Valeria - Card Kingdoms Flames and Frost Expansion
New threats have reared their monstrous heads in the land of Valeria Scouts have reported seeing fiery hounds to the South and beasts that bring with them winter's deathly bite to the North.