Spirits of the Rice Paddy
InB Spirits of the Rice Paddy, players must compete with fellow rice farmers to construct and tend rice paddies. Oxen can build walls and remove large rocks. Ducks can be employed to eat harmful pests and fertilize the fledgling crops. Weeds must be kept at bay. Most importantly, water must be conserved and released with the greatest of care. 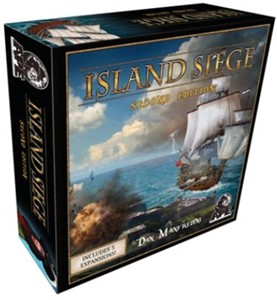 Island Siege - Second Edition
Island Siege is a fast-playing game of fort-building and colonization in the Caribbean Sea. Players build shoreside forts to defend their colonists from attack and to score points. Forts allow you to put colonists in play, which in turn can safely build ships and buildings which provide abilities and points.