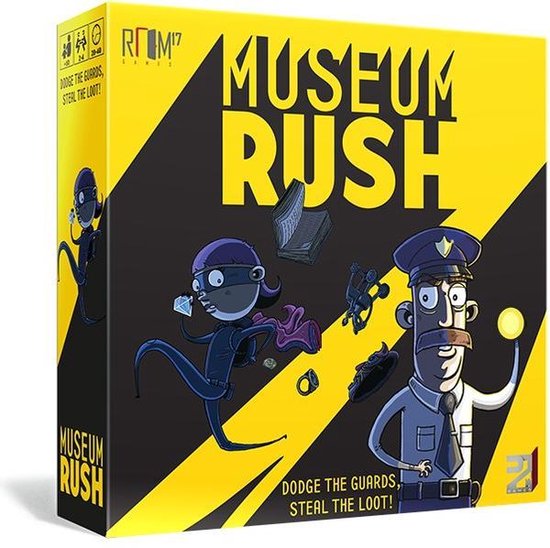 Museum Rush is a competitive thieving game in which players race against time to steal treasures from a museum while avoiding cameras, guards, and greedy rivals. Luckily these dastardly robbers have an array of items to help them get the better of the guards and their fellow thieves, such as sultry Llamas, mighty Underwear and the high-tech Cardboard Box.

Each player controls a thief, moving up to three tiles a turn. Then if they are on a tile with loot they can take a stealing action to grab some loot from the tile.

Certain tiles have special "Rare Treasures" that are worth a lot more than standard loot, but you have to crack the lock code by rolling the correct numbers before you can steal these!

Each stealing action brings the nearest guard two spaces towards the thief's tile. Trying to crack a lock does the same. After stealing, the next card in the room is turned up, which might reveal more treasure. But turn up a security camera and the guard moves another 2 spaces closer! If the guard ends up on the same tile as your thief, you can slip away with a dice roll or play cards like "Take Down" or "Lure" to get rid of the guard. Otherwise the thief is thrown out of the Museum and loses all card but one. The player can break in again so there is no player elimination in the game.

Each thief draws new cards at the beginning of their turns, these cards can be used to take out guards, disable security cameras and mess with the other thieves.

When you draw a Clock card, time will advance and once you draw a certain number of clocks, depending on the number of players, the game ends. At this point there is a rush to the nearest exit, rolling a dice to avoid dropping a card for every space you have to cover. The winner is determined by who has the highest value of loot at the game's end, once you are outside the Museum.
toon meer