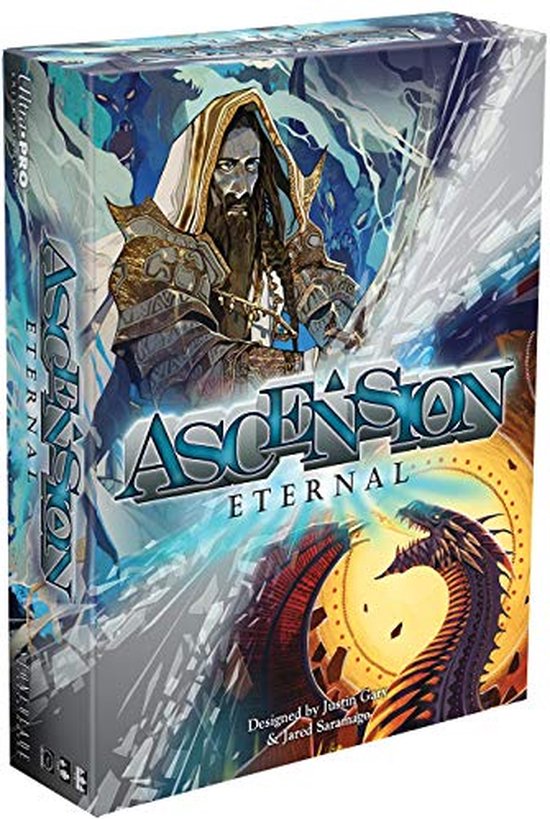 Ascension Eternal is a fast-paced deckbuilding game designed by Magic Pro Tour champions Justin Gary, Rob Dougherty, and Brian Kibler. Ascension is a deckbuilding game in which players draft from public piles of cards to build and strengthen their hand or attack monsters to build their winning Honor score.

Deploy a wide variety of strategy unique to every game you play - whether you are a slow & steady point collector or going for an aggressive all-out attack, no game will play the same!

This latest release of Ascension continues to build on the 10 year success of Ascension in the hobby/enthusiast market, this package brings all of the strategy and tactics of the award-winning deckbuilding game to a new low-priced, 2 player version that is easy to learn and a perfect entry point for new players! With a 20 minute playtime for 2 and the ability to add multiple copies together for more player action!

Ascension Eternal is a fast-paced deckbuilding game designed by Magic Pro Tour champions Justin Gary and Jared Saramago. Features the best cards of Ascension’s 10-year history gathered together for the first time! Included in the box is everything needed for a 2-player game: 122 cards, 20 honor tokens and 1 game board. Add additional sets to add more players! Experience the fun, magic, and excitement of this classic series with the new Ascension.
toon meer