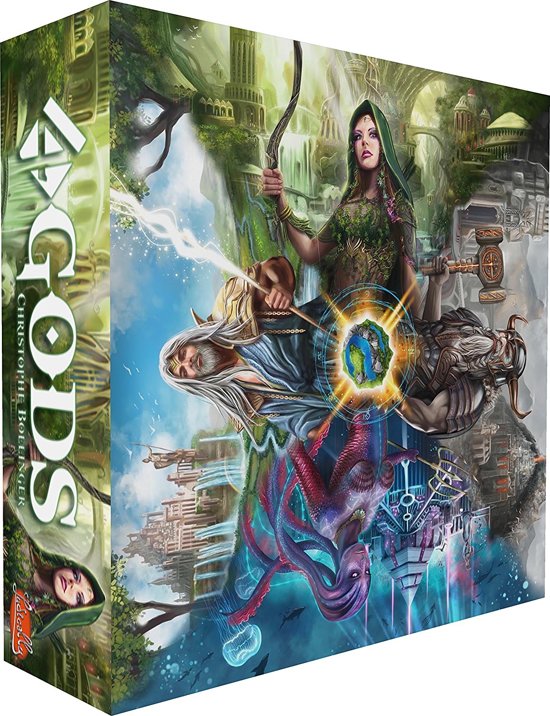 Four Gods is a real-time tile-laying game in which players create a world — one tile at a time — before laying claim to one of the four gods of their world and attempting to win followers by sending prophets into that world.

In more detail, players sit outside of a cardboard frame that represents the limits of the world. Each player starts with two randomly-drawn tiles in hand, with each double-sided tile depicting 1-3 types of landscape out of the four types present in the world.

When play begins, each player simultaneously starts laying tiles into the frame; each tile must be adjacent to two sides to be placed, so initially tiles can be placed only in the corners of the frames, with players building inward from there. Players can place tiles anywhere that they can legally be placed (two sides are adjacent to the frame or previously placed tiles and all landscapes match across tile borders.

Instead of placing a tile, a player can place it in their personal discard area, which can hold at most ten tiles. When a player has both hands free, they can draw two new tiles from the bag; alternatively, any player with a free hand can pick up any tile in any discard area and place it in the world.

At any point during the game, a player can claim one of four gods and that god's followers. Each god is associated with a particular type of landscape, e.g., the merfolk god. Once a player has followers, they can place a prophet on a tile they just placed to claim that section of landscape. Players can place any number of prophets in a landscape as long as they're placing each prophet on a tile they just added to the world.

At any point in the game, if a player thinks that a section of the board cannot be filled with a tile — e.g., a space that's surrounded by four types of landscapes — that player can place a round city marker in that space, and then claim that city with a prophet. If a matching tile is found later, a player can "smash" and collect that city, replacing it with the tile.

Whichever god has scored the most points wins!
toon meer